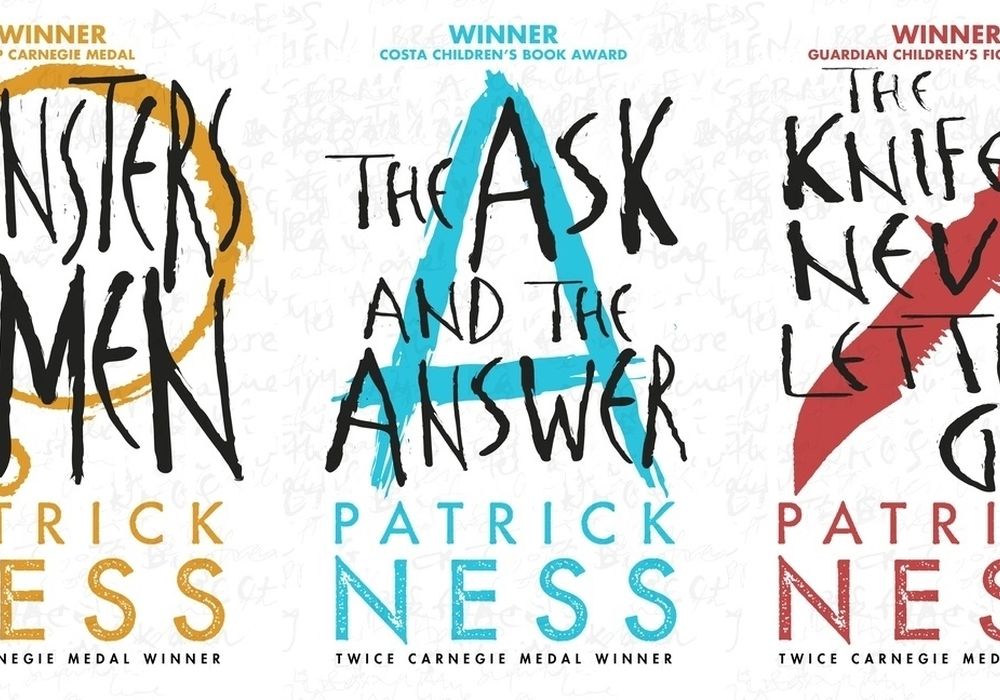 Welcome back bookworms! It has come to that time of the month where I get to share with you another book series. This time, I have chosen The Chaos Walking Trilogy, which I read over lock down (in a very small amount of time) and was a little different to something I have read before. Here are my opinions on the series.

The series consists of three books: The Knife of Never Letting Go, The Ask and the Answer, and Monsters of Men. There are also short stories in between these stories that help a little with some later situations or conversations (A New World, The Wide Wide Sea, and Snowscape). Each one gets bigger in size as you go up and follow different structures (chapters and section wise) and voices.

This dystopian and sci-fi series takes place on a planet: some humans have moved to another place in order to start life there (after ruining the other one with fumes) and have encountered problems with the native species and Noise. The story starts with Todd, a boy who has lived on this planet all his life, and in a world where everyone hears what he’s thinking, and vice versa. When he finds silence, he has to run, and we join him on his adventures to try and make his life and the ones he loves around him, better. The series covers issues such as terrorism, sexism, prejudice, and the prominent theme that most dystopian fictions include: the children are too young for this.

This series was much different to many series that I have previous read: the first book had sections and parts with one speaker, the second two with chapters, and the third three with only sections. Personally, I preferred the layout of the first two, because the chapters weren’t too long, and you could easily dip in and out of the series when you wanted to. The third one for me felt a little too long and confusing at some points, with it all one flowing story. However, hearing the stories of a prominent character in some of the other books was an interesting turn and really helped you to see all views and interpret the story much more clearly.

It also had some words spelt differently: in the first book (and less so towards the end of the books as he improves), some words are spelt as you say them, highlighting the fact that Todd is illiterate. Personally, I don’t know my opinion on this, as sometimes it took me a while to realise what they said, and I had to think about it more. However, it highlights the situation more, and how desperately Todd wants to learn to read and write (it makes you wonder if in the future, he was able to write the book himself?).

I believe the series also has a message behind it for its readers: if we ruin the planet we have at the moment, the next option we have to start ‘A New World’ won’t be as good as we think, and may have consequences. In some situations, we relate to Todd, and Viola, which makes us question if we could be them in the future?

Overall, I definitely think you should read this series: it’s a lovely series and one that you can get engrossed in. There’s also a movie predicted to come out soon based on the books! If you read it, or any other book, I would love to hear your opinions! I’m sure The Book Corner, and definitely me, would love some more books to enjoy.

If so, please write a review and follow this link. You can even earn a badge! https://www.girlguidinglaser.org.uk/challenges/report-for-the-hive