I like to say yes. Which results in all sorts of experiences you wouldn't expect. I've planted an award-winning garden at Hampton Court Flower Show, trained with the GB Paralympian sitting volleyball team, and grown plants from seeds that have orbited the earth on the International Space Station (ISS) as part of an experiment to see if humans could grow food on another planet.

I'm no VIP or celebrity (and certainly no gardener or athlete), just an ordinary woman who's part of an extraordinary organisation, Girlguiding. Which is how, last Monday, I found myself in Westminster Abbey discussing the soon to arrive Royal Family with a retired foreign diplomat. I was acting as a volunteer usher at the Commonwealth Service - an annual event to celebrate the Commonwealth of Nations.

Now, whether your knowledge of the Commonwealth is half-remembered from school, or, like me, mostly associated with the Commonwealth Games, this is a group it’s worth spending some time thinking about. The Commonwealth is a voluntary association of 54 member states encompassing many ethnicities and faiths. Member governments have agreed to work towards shared goals including prosperity, democracy and peace. The combined population is 2.4 billion people, approximately one-third of the world, of which 1.5 billion are under 30 years of age.

The Commonwealth Service is a celebration of this amazing group and I was privileged to find myself in the same room as some incredible people, and party to some inspiring performances, readings and speeches representative of the Commonwealth members and their shared values.

This year was attended by Her Majesty the Queen, The Prince of Wales and The Duchess of Cornwall, The Duke and Duchess of Cambridge, The Duke and Duchess of Sussex, the Earl and Countess of Wessex, British Prime Minister, Boris Johnson and his fiancée Carrie Symonds, the Commonwealth Secretary-General, Baroness Scotland, and the Vice-President of the Royal Commonwealth Society His Highness the Aga Khan IV (all of whom walked right past me). Most of the guests are invited but there is also a ballot for the public including schools and youth groups. Interestingly, this is the largest interfaith annual event in the UK and as well as representatives from 18 faith communities and Churches, the service included readings from His Eminence Archbishop Nikitas of Thyateira and Great Britain, representing the Greek Orthodox Church, Shaykh Ibrahim Mogra, representing the Muslim Community, The Venerable Bogoda Seelawimala, representing the Buddhist Community, and Rabbi Danny Rich, representing Liberal Judaism.

Sometimes being part of Girlguiding finds me making compasses from a paperclip, a magnet and a piece of plasticine, sometimes it’s making paintings with my feet, meeting a barn owl or entering a pancake race. But sometimes it’s something a bit different, and so, last Monday, I found myself singing God Save the Queen, standing not 3 metres away from her Majesty. What did you do last Monday? 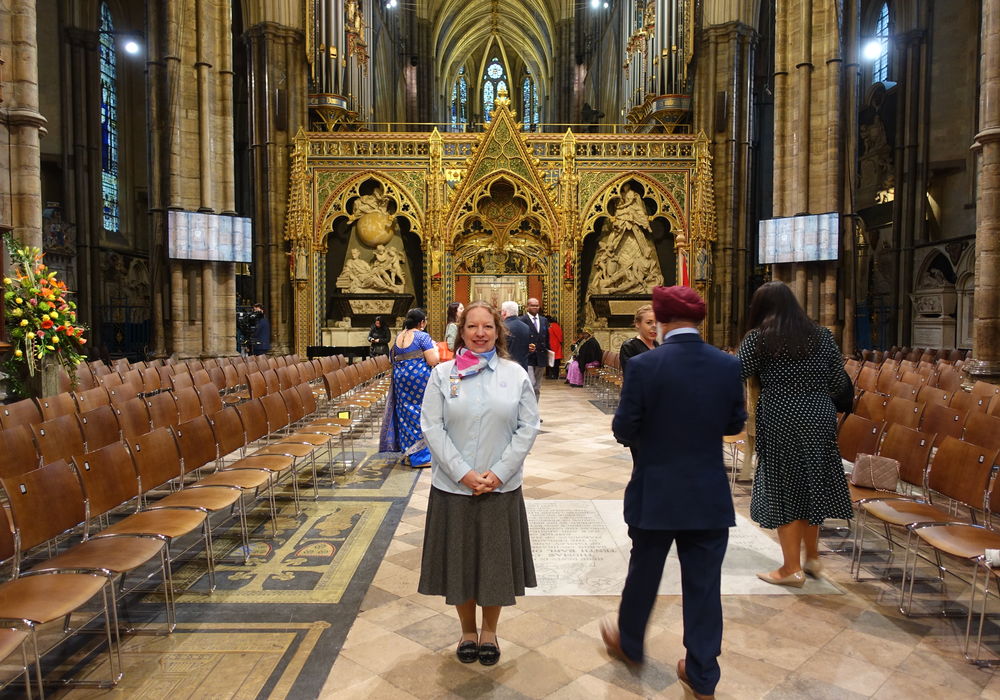 You can view the 2020 Commonwealth Service programme here.

And you can find more information about the Commonwealth here.