EF - I really liked my trip to Google because I liked the activities like meeting Maddie Moate, programming robots and making our own robots. My favourite part was trying on headsets and enjoying the virtual reality.

PS I would recommend going if you can! 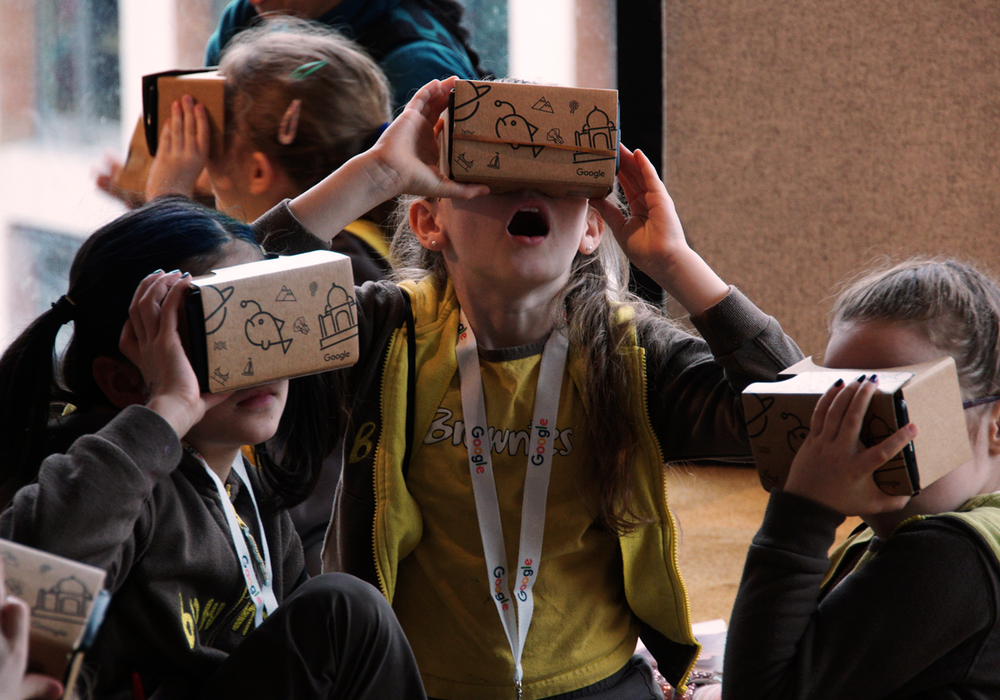 V - When 10th Surbiton Brownies got there, we said hello to a security dog and went up in a glass elevator.

What did we do?

I had a great time!

TG - I liked the virtual reality because you could not see your body. My second favourite thing was making pictures from post-it notes. My friend made a picture of a pig!

My least favourite thing was that it was so far away. I loved the trip so much!

PS we made a robot that was the best!

IG - I really enjoyed the virtual reality. We got to go into different worlds and explore what was in the worlds.

I also enjoyed making the robot. I made a robot called Bobby Jeff and this was fun. After we made Bobby Jeff we got to take pictures of him.

Google was a really big building. When we arrived, we saw all these drawings on the windows: they were made from post-it notes. We went up in a glass elevator. Google is so much fun.

"We had a great day at Google, an amazing experience and I will never forget it!"

La M - When we arrived at Google we went to the reception and took a lanyard so we could get around. When we got the lanyard we went to a glass elevator where we patted a dog and then went in. As we went up we saw all the pixel art on the office windows which was made out of sticky notes. When we got to the top we started doing some activities. The first activity we did was coding. Coding is really hard as I found out. The best activity we did was the virtual reality. When we looked, it looked so realistic until I realised that I was standing in space on top of the sun! I think the hardest thing was when we were coding the robot spheres. It was really HARD!!!

It was a really fun day! 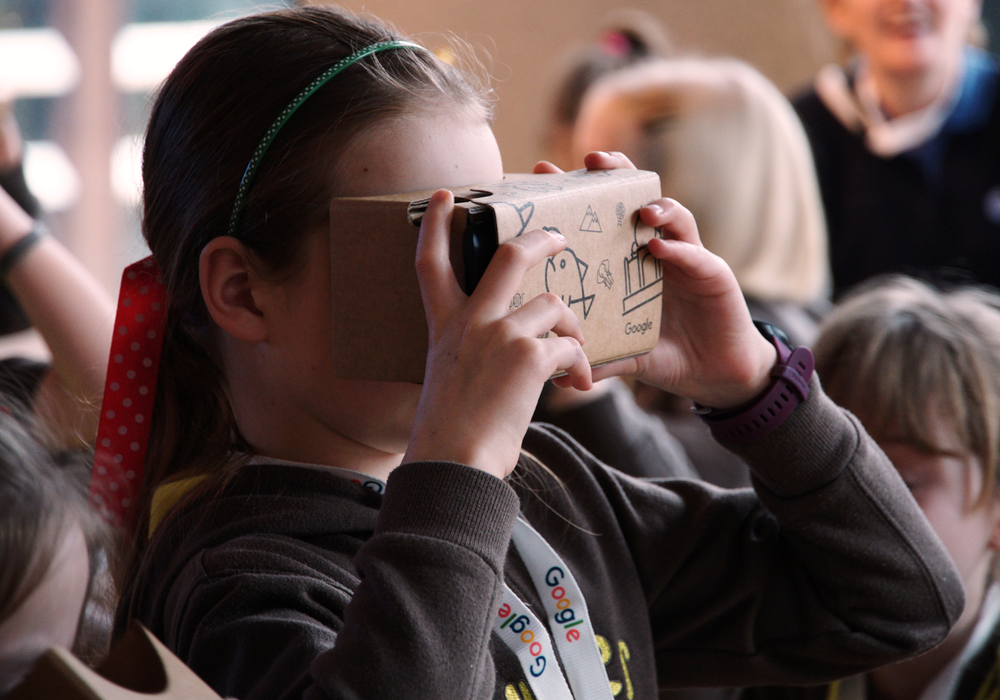 AD - 1st best thing: Robot building. I made a robot called Milly. She is a Brownie robot and is made from loo rolls, one paper bag, pipe cleaners and felt tips. She is the BEST ROBOT EVER!!!

LG - My favourite thing at Google was making our robot, Steve. The way we made him was: we got a cardboard box and a plastic pot for a head and got some pipe cleaners for the wires and cardboard toilet rolls to move it. It had a computer keyboard drawn on it.

We also did some pixel art on a window which was cool. I did a pig because they are my favourite animals. We had to use sticky notes to create this. We also met Maddie Moate who does ‘Did you Know?’ on Cbeebies and Earth Unplugged.

I really enjoyed listening to Maddie, she is someone who works a bit with technology and science and I thought that was pretty cool.

AR - My favourite thing was the pixel art where we stuck post-it notes on the window, because you got to make a picture on the glass so that everyone could see it outside.

My second favourite thing at Google was making a robot out of crafting things and then you get to take pictures of you and your robot. We worked in groups.

I kind of liked the virtual reality because you could turn around and look at other things behind you and you could try to spot objects. 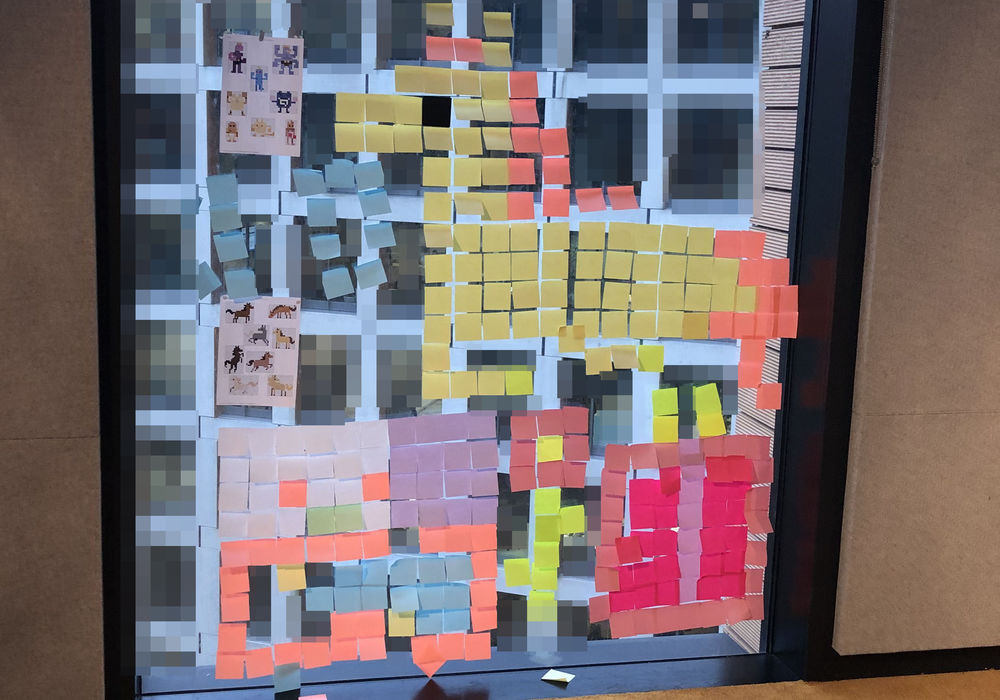 IS - I really liked when I went to Google with Brownies. My favourite part was when I got to control the robots. I liked how I got to design it however I wanted to and could control it myself.

I liked meeting Maddie because she was very inspiring.

I can't think of anything I didn't like apart from I left my Google water bottle behind. Thank you for the opportunity, I had a great day!

Lu M - You don't need to search at all to find a fabulous time at Google. A hundred expectant Brownies all had their ambitious dreams met at this high tech giant. We programmed robots, experienced the incredible with virtual reality, met Maddie Moate (and yes, like Google she does know everything), made pixel art with post-its, learnt about and built technology and rode incredible lifts. Most importantly of all, our discoveries won each of us a badge.

Although I loved the going home bag, it's Sphero, the robot, that I've told most people about. Not only was he incredibly fun, he really opened my eyes to what robots already can do and their potential. If Sphereo opened my eyes, virtual reality stunned my brain. I never expected to explore space, go under the sea and practice my camouflaging skills all in the same room.

I'd like to say a huge thankyou to everyone who made this day so amazing; I'm sure it was a day none of the lucky 100 will ever forget!